“I participated in an Ambassador Activation on behalf of Mom Central Consulting (#MC)  for Lay’s. I received a promotional item to thank me for participating.”

I love to cook. I love coming up with new recipes. I love getting my kids in the kitchen and teaching them how to work with fresh ingredients and teaching them how to eat healthfully. I have so many recipes that I’ve taken pictures of for the blog that I haven’t posted yet! I’m so excited to share them with you in the coming weeks. I’ve made a round up of four of our favorite recipes that I think might translate into a Potato Chip Flavor for the Lay’s Do Us a Flavor Contest. What do you think? 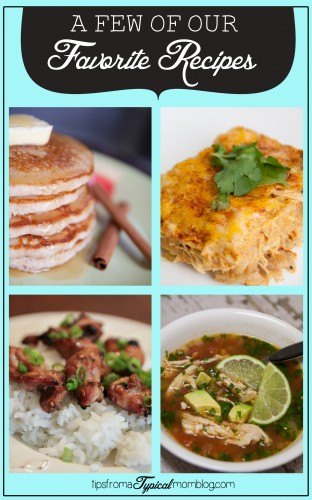 The Lay’s “Do Us A Flavor” contest invites fans nationwide to submit their ideas for the next great Lay’s potato chip flavor for the chance to win a $1 million grand prize (see rules here). A judging panel made up of chefs, foodies and flavor experts will narrow down the contest submissions to four finalist flavors. The four finalist flavors will then be fully developed by Frito-Lay’s culinary experts and unveiled in summer 2014 and sold nationwide. From there, it will be up to fans to vote for the finalist flavor they want to see stay on store shelves, and the finalist behind the winning flavor will take home the million dollar grand prize (see rules here). New this year, fans are able to choose from three potato chip forms – Lay’s Original, Lay’s Kettle Cooked and/or Lay’s Wavy – for their flavor ideas. Contest ends April 5, 2014.

The first recipe is our Apple Cinnamon Pancakes with Caramel Syrup. Now we all know that sweet and salty make a great combination, so I think Apple Cinnamon Caramel Lay’s Kettle Cooked Potato Chips would be awesome!

The next recipe is my famous Mexican Casserole. It’s the perfect combination of flavors. Corn tortillas, chicken, sour cream, cumin, chili powder and cheese. I think that would make a great Lay’s Potato Chip Flavor too! I’d call it Sour Cream Enchilada Chips.

Hawaiian Grilled Chicken with Coconut Rice is next. I have no words for these. They are PERFECT. Sweet and savory and the coconut rice is the best side kick for this dish. How do you think these flavors would translate into a Potato Chip Flavor?

And last but not least is my Chicken and Lime Soup. Lime, chilies, avacado, cilantro, a perfect combination for a Potato Chip Flavor. Right?

We love making recipes our own by adding ingredients, replacing ingredients to make things healthier and trying new things. What are some of your recipes that you think might translate well into a potato chip flavor for Lay’s Do Us a Flavor Contest?

Hi! I'm Annette Belnap. I'm a typical wife and mom to 5 kids ages 22, 21, 18, 16 and 10. I love to share family friendly recipes, parenting advice, cleaning and organizing tips and product reviews. I'm so glad you're here! Read more about my family and me.